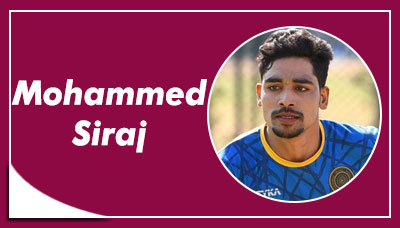 Some restlessness is likely, mainly because of a deep feeling of wanderlust. Mohammed Siraj don't like to get backed into a corner, so this can cause some strain. The period will begin with a phase of volatility and pressure in career. New project and risks should be avoided. Mohammed Siraj need to curb new investments and commitment. There are chances of gain but swings in work environment which will not be entirely comfortable. This period is not good as far as worldly comforts are concerned, religious and spiritual deeds can get Mohammed Siraj out of troubles. Mohammed Siraj may face sorrow through Mohammed Siraj's relatives. Sudden accidents and losses are also possible.

Be careful while dealing with friends, relatives or associates, as chances of disputes are very much there. This will not be a good time for business and there are chances of sudden loss financially. Expenditure on secret activities is possible. Mohammed Siraj may suffer due to mental stress and strain. Injuries and wounds are on the card during this period, so be careful especially while driving.