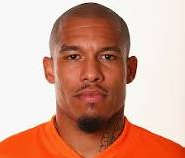 The outlook however will remain average mostly throughout the period. Nigel De Jong should work on developing Nigel De Jong's profession rather than focusing on gains. During this period there could be personal issues & minor health issues which could create hurdles for work. There would be challenges and new choices which should be taken carefully. New projects should be totally avoided. This period will experience hurdles due to Nigel De Jong's un-adjusting nature as well as competition in work environment. Purchase of land and machinery should be postponed for some time.

In this period Nigel De Jong will spend more on luxuries and comforts but it would be better if it is checked out. Nigel De Jong may face disappointments in love affairs and trouble in family life. Nigel De Jong's rivals will try to harm Nigel De Jong in each and every possible way so try to be more concerned when dealing with any kind of personal or professional matters. A worry related to health of Nigel De Jong's family members is on the cards. Though financially, it is not a bad period but still Nigel De Jong should put hold on over expanses. Get proper care of Nigel De Jong's own health.

This is an excellent period for Nigel De Jong and monetary gain is on the cards. There may be pleasant surprises and lot of get together with family and relatives. It is a favorable period for Nigel De Jong so make the best use of this time. There will be gain from person of opposite sex and favors from superiors. As far as money matter is considered it is a fruitful period.

This is the time which will show Nigel De Jong mixed results. Don't overlook minor health related problems because it may turn into a big one. Some diseases that require special attention are ulcer, rheumatism, vomiting, head an eye troubles, pain in joints or injury due to falling of heavy metallic lump etc. Difficult situations may arise in Nigel De Jong's path but don't lose Nigel De Jong's heart in the adversities as Nigel De Jong's self-confidence will work in Nigel De Jong's favor. Dispute with government and senior officials are on the card, so Nigel De Jong are advised to be careful. This is not a favorable time for speculation or taking risks.