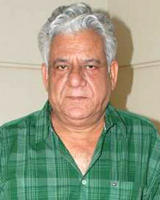 This is an excellent period for Om Puri and monetary gain is on the cards. There may be pleasant surprises and lot of get together with family and relatives. It is a favorable period for Om Puri so make the best use of this time. There will be gain from person of opposite sex and favors from superiors. As far as money matter is considered it is a fruitful period.

Om Puri should avoid complacency and easy-going attitudes, tone down the flashier side of Om Puri's nature, and get back to old-fashioned hard-work in an attempt to succeed in life. Financially it will be a difficult period. Om Puri may have to confront theft, scandals and disputes during this period. Om Puri will find increased work-loads and heightened levels of responsibility at work. This is considered somewhat a bad period for health. Om Puri can face ear and eye troubles. Om Puri's life-partner can also have health issues. Om Puri's peace of mind will remain disturbed.

Volatility & some lack of direction in career will prevail as the period starts. Om Puri should avoid new projects or major changes in career during this time. Om Puri will not be able to cope well with Om Puri's friends and relatives. Unwanted situations may arise, which can create fighting, troubles into Om Puri's life. Don't adopt undesirable means for quick monetary gains. Working/service conditions shall not be satisfactory. There could be danger of accident/mishap. Try to build up Om Puri's confidence to cope with awkward situations which will come in this period. Om Puri may have cough problems, asthmatic complaints or rheumatic pains.

There will be a strong influence from others to help Om Puri create more personal security in having Om Puri's material needs met. Money will definitely be coming Om Puri's way and will greatly influence Om Puri's personal beliefs, dreams and philosophies. Om Puri will get recognition of Om Puri's merits by the government and higher authorities. Om Puri have a friendly nature, and feel very comfortable enjoying the group dynamics of different social scenes; Om Puri may get disturb a bit due to health ailment. Personal transformation is far more appealing than outer changes.

The outlook however will remain average mostly throughout the period. Om Puri should work on developing Om Puri's profession rather than focusing on gains. During this period there could be personal issues & minor health issues which could create hurdles for work. There would be challenges and new choices which should be taken carefully. New projects should be totally avoided. This period will experience hurdles due to Om Puri's un-adjusting nature as well as competition in work environment. Purchase of land and machinery should be postponed for some time.

Om Puri are an eternal optimist, and events of the year will further strengthen Om Puri's optimistic instincts. Om Puri can do reasonably well if Om Puri time Om Puri's investments intelligently based on the best periods hinted for Om Puri's sign. All round cooperation and happiness can be the reward from Om Puri's loved ones and associates, victory over opponents and pleasant functions such as marriage or romantic situations parties are also the likely outcomes. Family atmosphere will be quite satisfactory.

Om Puri will be able to maintain good rapport with Om Puri's superiors which is very beneficial to Om Puri on long run. Loss of position is indicated during this period. Om Puri's mind will be full of innovative and creative thoughts, but don't try to apply them without realizing the pros and cons of the situations. Om Puri should give more attention to Om Puri's domestic life. Travel is on Om Puri's cards and would be very rewarding. There are chances of ill health of Om Puri's family members so take good care of them as well as Om Puri'ss.

Om Puri will come up with new ideas for dealing with Om Puri's challenges. Dealings and transactions will work out smoothly and effortlessly for Om Puri, as Om Puri score one over Om Puri's competitors. Income will come for Om Puri from more than one source. Om Puri's friends and family will just make Om Puri's personal life so much richer and more fulfilling. Om Puri's relations with Om Puri's clients' associates and other concerned persons will definitely improve as the period rolls on, Om Puri will buy some luxury items in this period. Overall, a rewarding period for Om Puri.