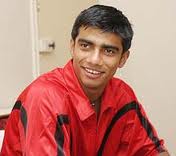 Adrian Albert D'souza is a field hockey goalkeeper from India, who made is international debut for the Men's National Team in January 2004 during the Sultan Azlan Shah Hockey Tournament in Kuala Lumpur, Malaysia....Read more on about Adrian D Souza horoscope