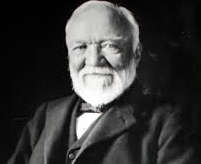 Andrew Carnegie was a Scottish-American industrialist who led the enormous expansion of the American steel industry in the late 19th century....Read more on about Andrew Carnegie horoscope