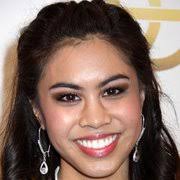 Ashley Argota was born on 9 January 1993 in Redlands, California, United States. She is an American actress and singer....Read more on about Ashley Argota horoscope