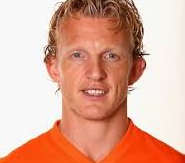 Dirk Kuyt is a Dutch footballer who plays for Fenerbahçe as a winger. He is known for "constantly racing up and down his right flank, making runs, tracking back, harrying opponents and generally battling to create space."...Read more on about Dirk Kuyt horoscope

Dirk Kuyt may suffer due to health complications of Dirk Kuyt's spouse. Dirk Kuyt will find it difficult to adjust with Dirk Kuyt's associates and seniors. Progeny related problems are on the cards. The native faces hardships in every sphere of life. Silly quarrels, misunderstanding and arguments in love life or married life are seen. There will be disagreement with Dirk Kuyt's life-partner and family members. Health problems are also on the cards. Mental control is very much required during this period, as Dirk Kuyt may desire to do something unethical. ... Read more on Dirk Kuyt 2022 Horoscope

A birth chart (also known as kundli, janma kundali, or horoscope) is a map of heaven at the time of birth. Dirk Kuyt's birth chart will show you Dirk Kuyt's planetary positions, dasa, rasi chart, and zodiac sign etc. It will also allow you to open Dirk Kuyt's detailed horoscope in 'AstroSage Cloud' for research and analysis.... Read more on Dirk Kuyt Birth Chart