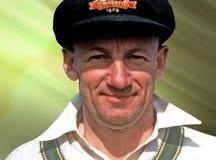 Sir Donald George Bradman, AC, often referred to as "The Don", was an Australian cricketer, widely acknowledged as the greatest Test batsman of all time....Read more on about Donald Bradman-1 horoscope