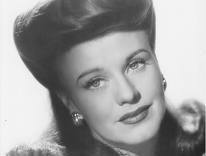 Ginger Rogers was an American actress, dancer, and singer who appeared in film, and on stage, radio, and television throughout much of the 20th century....Read more on about Ginger Rogers horoscope