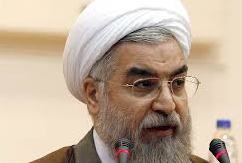 Hassan Rouhani is an Iranian politician, Mujtahid, lawyer, academic and diplomat, who is currently the President-elect of Iran....Read more on about Hassan Rowhani horoscope