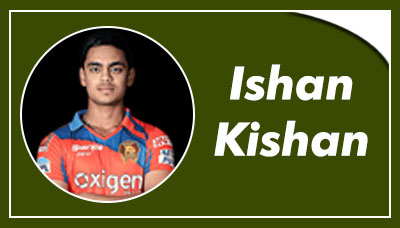 Ishan Kishan is an Indian cricketer, who plays for Jharkhand in domestic cricket. He is a left handed batsman and a left arm medium pace bowler. He serves as a batsman and a wicket keeper. He was the captain in the 2016 Under 19 Cricket World Cup. In Vivo IPL 2018, he will be a part of Mumbai Indians....Read more on about Ishan Kishan horoscope

Ishan Kishan may get indulge into sudden losses financially. Failure in attempts will make Ishan Kishan feel frustrated. Ishan Kishan will have to slog as the work burden will be too much. There is displacement, transfer and trouble in foreign lands. There are chances of falling into bad companies so, better aware of that. Ishan Kishan's health will be weak and Ishan Kishan will be caught by many diseases. Ishan Kishan's social reputation can also be hampered. There will be disputes with good people in the society. ... Read more on Ishan Kishan 2021 Horoscope