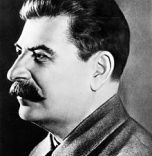 oseph Stalin or Iosif Vissarionovich Stalin was the de facto leader of the Soviet Union from the mid-1920s until his death in 1953....Read more on about Joseph Stalin-1 horoscope