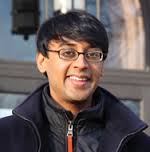 Manjul Bhargava is an Canadian-American mathematician. He is the R. Brandon Fradd Professor of Mathematics at Princeton University. He is known primarily for his contributions to number theory....Read more on about Manjul Bhargava horoscope