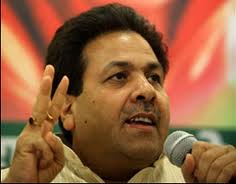 Rajeev Shukla is chief of IPL, an Indian journalist and the Minister of State for Parliamentary Affairs....Read more on about Rajeev Shukla horoscope