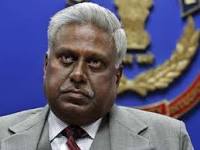 Ranjit Sinha is an Indian Police Service officer of the 1974 batch and the current Director of the Central Bureau of Investigation....Read more on about Ranjit Sinha horoscope