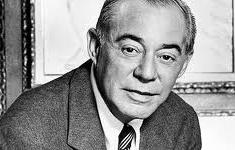 Richard Charles Rodgers was an American composer of music for more than 900 songs and for 43 Broadway musicals....Read more on about Richard Rodgers horoscope