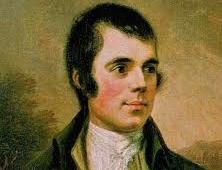 Robert Burns was a Scottish poet and lyricist. He is widely regarded as the national poet of Scotland and is celebrated worldwide....Read more on about Robert Burns horoscope