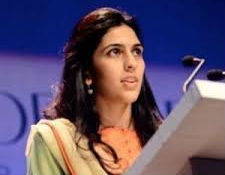 Shloka Mehta is a businesswoman and the youngest daughter of diamantaire Russell Mehta and Mona Mehta. She is a director with Rosy Blue Diamonds and is a co-founder of ConnectFor, an organisation that helps NGOs get volunteers for various causes. Shloka grabs media atention when news came out about Mukesh Ambani's eldest son Akash may soon be betrothed to Shloka, the youngest daughter of Russell Mehta, Managing Director, Rosy Blue India....Read more on about Shloka Mehta horoscope

The position of Muntha is very favorable to Shloka Mehta. Just let go and enjoy the happiness that comes Shloka Mehta's way. At last Shloka Mehta can relax and enjoy the success and the results of the hard work Shloka Mehta had been doing for a long time. This period will also bring Shloka Mehta in the midst of famous people. Gain from foreign lands will build Shloka Mehta's status. Gains from superiors and higher authorities are also indicated. Shloka Mehta will get happiness from the life partner and children. There will be religious ceremony at home and name, fame and luck due to that. ... Read more on Shloka Mehta 2022 Horoscope