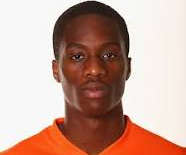 Terence Kongolo is a Dutch footballer who made his Eredivisie league debut for club Feyenoord during the 2011-2012 season. He has two younger brothers; Rodney, born in 1998 and currently enrolled in Manchester City's academy, and Fidel....Read more on about Terence Kongolo horoscope