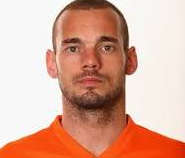 Wesley Sneijder is a Dutch professional footballer who plays for the Turkish club Galatasaray and the Netherlands national team. He was named UEFA midfielder of the season and one of the three best midfielders in the world for 2010 by FIFA....Read more on about Wesley Sneijder horoscope